Les Robson and Annie Fleming, co-founders of the Greyhounds

In the 1990's, Les and Annie wondered what it would be like to have a Track and Field Club organized exclusively for seniors. They talked up the idea and soon had an informal group of track and field enthusiasts meeting regularly for practice at Poirier Track.

But, it was soon apparent that, keen as they were, no one in the group knew anything about track and field.

One day, at a track meet in 1998, Les spotted Harold Morioka at a Masters Track Meet and asked him if he would coach the club.

Les served as President of the Greyhounds for many years, and two years ago, in recognition of his years of service to the club, was named an honourary life time member.

Sadly, Annie passed away but not before inspiring other senior women to take up the sport of track and field. 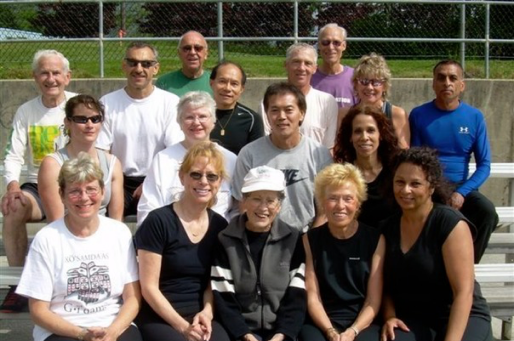 The original name of the club was called the Tri-City Greyhounds because most of the members lived in the Tri-City area and the training track was in Coquitlam. The club which started as a Seniors (55+) Club, was formed because all of the existing clubs in British Columbia catered to the younger athletes and it was not possible for older athletes to train with them.

The first year there were only about 15 members, all living in the Lower Mainland or Fraser Valley, but the club has grown steadily and in 2017 the club has reached 100 members for the first time and our members live in all regions of the province.

The club was successful from the very beginning, winning many medals at the local club meets, at the provincial championships and at the BC Seniors Games. Many provincial, national and world records were broken by our members. The success of the club attracted others who wanted to join, including athletes who were not yet of Masters age and definitely not Seniors.

Within a few years a decision was made to lower the age of our members to include everyone who qualified as a Masters athlete, at that time 35+ for women and 40+ for men (now 35+ for men). This year our youngest member is 35 and our oldest member is 92. At the end of the 2016 season our Greyhounds Masters Club had 91 members. During the year, our members broke 40 BC Masters individual track and field records and were members of 16 relay teams that broke BC relay records. Included in these numbers were 14 Canadian records and 4 World records.

So far in 2017, our club members have broken 39 BC, 18 Canadian and 5 World individual track and field records plus our members were on relay teams that broke 9 BC and 4 Canadian records. 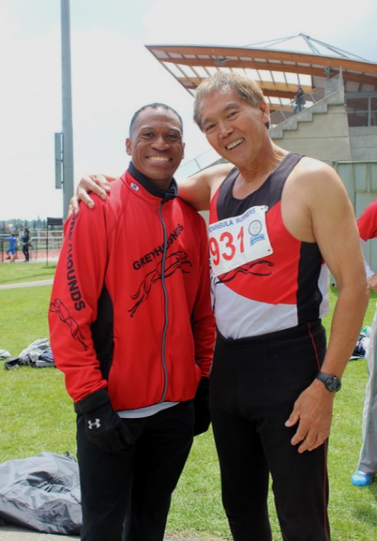 One of the Greyhounds founders, former head coach and Canadian sprinting legend Harold Morioka continues to add his leadership influence at practices and meets.

“When the Greyhounds Club was formed in 1999, I could not have imagined that the club would be so successful and attract so many excellent athletes. We have such a great group of individuals from many backgrounds and abilities. The strength of our club comes from the dedication, trust and friendship of every member. Everyone is positive and supports each other at practises and during competition. I'm extremely proud of every member for making the Greyhounds 'a family'.”

Harold is the only athlete in the world to break world records from 60m to 800m and has been inducted into the BC Athletics Hall of Fame. Another unique point is that Harold was the first 51-year-old to run his age in the 400m. That is, 51 seconds at the age of 51!

When the club was formed the membership fee was only $25/year and has been kept very affordable over the years with todays fee being $100/year. Each week the track members receive detailed workout schedules tailored to their distance speciality by head coach Sam Walker. Aside from the incredible athletic achievements by the Greyhounds, Sam likes to highlight the spirit of its members:

“Achievements through our sport of track and field not only recognizes those that win medals or receive national attention but also individual stories of achievement in each race, jump or throw that are all worthy of commentary. As a club, we celebrate each other’s success and appreciate that doing our best is sometimes all it takes for inner satisfaction. Together we succeed, have fun and achieve!” 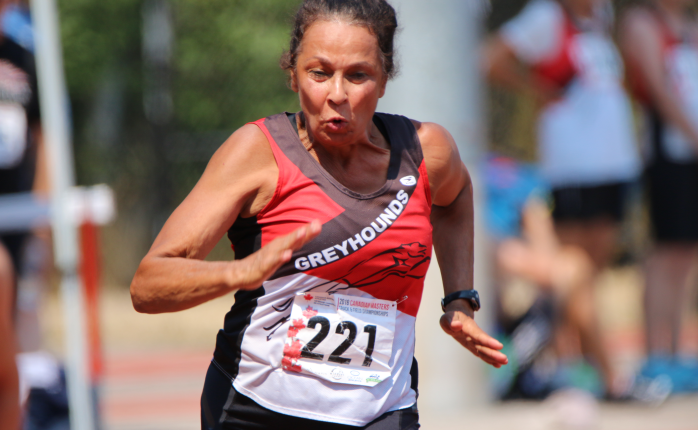 Urith Hayley - President of the Greyhounds

Approximately 80% of the membership are over 50 years of age. Recently retired, David Walker of Vancouver, BC, is one example of what attracts folk to The Greyhounds. “After great personal success in marathon running in the late 70’s and 80’s I honestly thought my love of running had hit the proverbial wall! Now at 67, I have rediscovered the sweet competitive spirit, the good feeling of wellness and most of all, the camaraderie that oozes out of practices and meets!”

“Camaraderie is good, but healthy competition at practices also pushes members to train harder when working with teammates. It’s always more fun when doing a rep with partners rather than solo and often someone will run alongside a member who is trying to complete a distance within a certain time.”

Yes, recovery may take longer but its still sweet to sense the enthusiasm from the members as they crush an old personal best.This enthusiasm for an ever better future through track and field radiates from the physical, mental and social engagement of the members.

You can see it in the fun they have at practices, the age defying ambition at meets and the love they have for living well at any age! And with this engagement is coming world-wide recognition. Both the honor and enjoyment are well deserved!