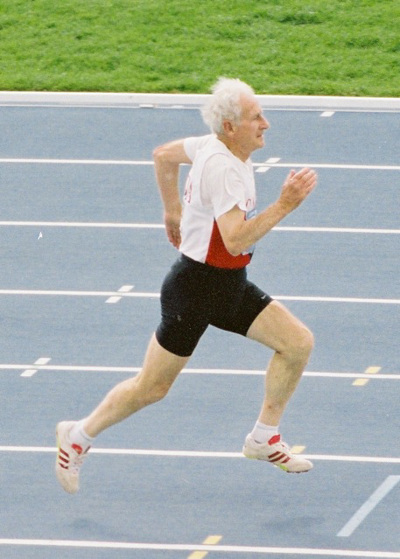 In 1998, Les Robson had a vision of forming a track and field club for seniors so that older athletes could receive coaching in preparation for the BC Seniors Games. Due to his foresight, this became a reality when the Tri-City Greyhounds Track and Field Club for seniors (55+ at that time) was formed in March, 1999, and Les was the president of the club for eleven years. In later years the club's name was changed to Greyhounds Masters Track and Field Club, and the age of the members were aligned with the age requirements of BCA, CMA and WMA (presently 35+).

Les was very involved with the BC Seniors Games, not only as an athlete but also as an administrator, serving as Zone 3 Director and track and field coordinator. When the BC Seniors Games were hosted by Coquitlam in 1991, he and companion Anne Fleming were honoured to carry the torch into the stadium for the Opening Ceremonies. From the inception of the Games in 1988 until 2012, Les had competed in every Games.

Les competed in his first, and only, Canadian Indoor Championships in 2011. He won silver medals in the long jump and triple jump, and bronze medals in the 200m and 400m. But the highlight for him was joining three other athletes in breaking the Canadian Indoor record in the M80 4x200m (2:39.45).

After turning 85 in 2012, Les broke the BC M85 triple jump record, and his relay teams broke the BC Indoor 4x200m and the Outdoor 4x100m records. In 2013, at the BC Masters Indoor Championships, he won 4 gold medals and broke BC Indoor records in the long and triple jumps. He would win 4 more gold medals at the BC Masters Outdoor Championships. Les ran the final race of his career at age 86.

In 2017, the Greyhounds Club established the Les Robson Service Award which, from time to time, will be awarded to an individual for exceptional service to the club over a number of years.