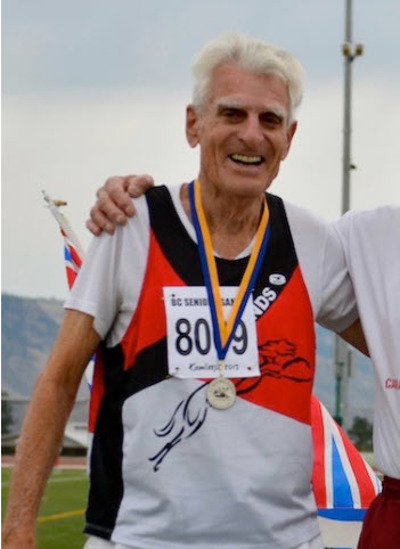 As a young man, Phil Lefebure played soccer in a men’s league, bowled in a 10-Pin bowling league for many years and was very involved in tennis – even becoming the president of the Coquitlam Tennis Club. After he retired from the Vancouver Weather Office, Phil and his wife, Pauline, took up lawn bowling.

In 1999, when he heard about the newly-formed Greyhounds track and field club for seniors, he decided to participate in track and field, too. Phil was mainly a sprinter and concentrated in the 100m, 200m and 400m, but occasionally competed in the 800m and 1500m. He mainly entered in the BC Seniors Games and occasionally in the BC Masters Championships and the Langley Pacific Invitational Meets.

Twice Phil was a double gold medalist at his hometown Langley Pacific Invitational Meet. In 2000, Phil won gold medals in the M65 200m and 800m, and in 2009 he won gold medals in the M75 100m and 200m. He became the BC champion when he won the gold medal in the M80 400m at the 2011 BC Masters Championships hosted by the Langley Mustangs. The following year, Phil competed in an indoor meet for the first, and only, time when he competed in the BC Masters Indoor Championships in Kamloops. There he won bronze in the M80 60m, silver in the 200m and gold in the 4x200m relay. This team, which included Greyhounds teammates Les Robson and Norm Lesage, set the BC M80record (2:53.88), a relay record which still stands today (eight years later).

Phil's family wrote “...the man knew more random facts than anyone and could recall them with great clarity (sometimes too much clarity and his stories were well-known to take some time!).” Phil loved to run but he probably loved to talk even more. One time at a track meet he was telling one of his stories when the coach asked, “When is your next race?” As he looked towards the track, Phil answered “The 400m, and oh, that's my race that they're running right now.” And he kept on talking.