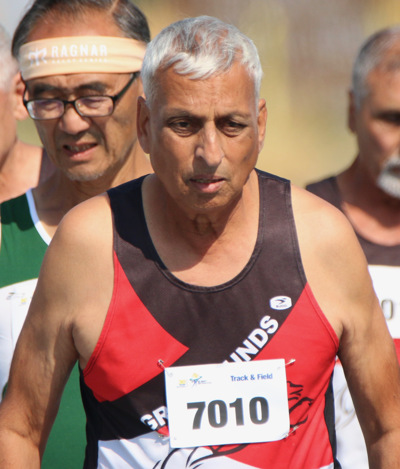 Sewa competed in his first indoor meet at the 2009 BC Masters Indoor Championships, where he won gold medals in the M60 200m, 400m, shot put (BC Indoor record) and 4x200m (1:56.12, Canadian Indoor record). After winning many medals in the M60 age category, he was looking forward to 2011 when he could compete in the M65 age group. But tragedy struck. While on a construction site he noticed something falling off the roof. Instead of thinking about his own safety, Sewa pushed his friend out of harm’s way, only to have the 2x12 inch lumber strike him on his head. He was taken to emergency, where he was in a coma, suffering from a severe concussion. It would be a long two-year recovery for Sewa. Depressed, he thought that he would never compete again.

Then tragedy struck Sewa again. In the Fall of 2014, Sewa was diagnosed not only with prostate cancer, but worse, the cancer had spread into his bones. The doctors advised him to stop training and not to compete again. Sewa entered the 2015 BC Masters Indoor Championships and surprised everyone, especially his doctors, when he won 2 gold medals, a silver and a bronze – despite being weakened by anti- cancer drugs and undergoing chemotherapy treatments. Amazed that Sewa was doing so well, the doctors agreed to let him continue his running. At the Greyhounds 2015 year-end banquet, Sewa was awarded the Purple Heart Award for Courage.

In 2016, Sewa won gold medals at the BC Masters Indoor and Outdoor Championships. He also won a gold medal and 2 bronze medals at the Americas Masters Games hosted by Vancouver. His M70 relay team broke the Canadian record in the 4x400m (4:53.44). Finally, in October Sewa went to St. George, Utah, to compete in the Huntsman World Senior Games, where he won the 400m.

All told, Sewa competed on relay teams that broke seven Canadian records. The most significant relay team that Sewa ran on was the 2008 team that broke the WORLD INDOOR RECORD in the M60 4x400m. The team of four Greyhounds, including Tony Badowski, John Winfield, Harold Morioka and Sewa, finished in 4:13.30, breaking the world record of 4:14.76 that an American team set in 2005.

Sewa was an amazing person. He always encouraged everyone and often helped others by running beside them to keep them on pace during their training runs. Despite his injuries and medical problems he always remained optimistic. He never complained and when asked how he was, he always said “I'm okay.” He always had a big smile on his face. Everyone loved Sewa.