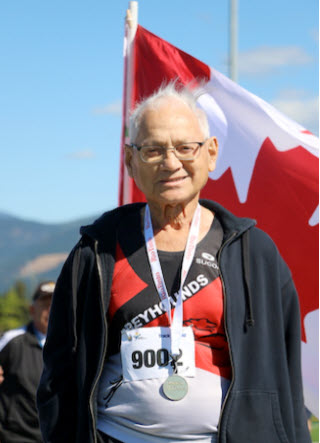 Most people probably compete in track and field for the first time as teenagers, but not Scot Henney.  Scot didn't enter his first track and field meet as a teenager, nor in his twenties or thirties, not even when he became a senior citizen.  It was not until Scot turned 90 in 2015, that he decided to join the Greyhounds Masters Club to get some coaching in the sprints, long jump and throwing events.  Scot entered two meets that year.  At the BC Masters Outdoor Championships, he won two gold medals in the discus and javelin.  Then at the 55+ BC Games Scot won 6 gold medals in the 100m, 200m, long jump, discus, shot put and javelin (breaking the BC M90 javelin record).

Scot had a frustrating second year, starting out with an injury in April which would keep him out of competition for four months.  Finally in August, he entered a throws meet and set a BC record in the Super weight throw.  Scot entered six events for the 55+ BC Games in September.  On the first day of competition Scot won the gold medal in the throws pentathlon.  But the next day while running the 100m, Scot pulled a hamstring muscle and had to withdraw from the Games.  Recovered from his injury, Scot went to Perth, Australia, to compete in the World Masters Games in October/November. Scot won gold medals in the throws pentathlon and weight throw, silver in the hammer, and bronze medals in the shot put and javelin.

Not feeling well for several weeks, Scot was admitted to Ridge Meadows Hospital in April.  On May 9, just three weeks shy of his 93rd birthday, Scot lost his battle to liver cancer.

The Greyhounds are extremely proud to have had Scot as a member of the club.  He was an excellent athlete but an even greater person.  He was friendly, well-mannered, dedicated and always had a smile on his face. The Greyhounds will miss him.