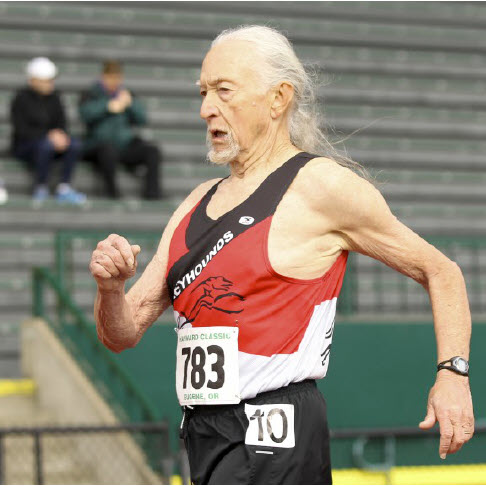 Mac was first diagnosed with colon cancer in 2005 and not too long after, the cancer had spread into his liver. But Mac was a fighter and he was not going to let this disease control his life. He remained active and in 2014 he joined the Greyhounds Masters track and field club.

In 2015, Mac competed in his first track and field meet, the Hayward Masters Classic at Eugene, Oregon. Due to loss of muscular control from his strokes, Mac had difficulty locking his knees (a requirement with every step of the Race Walk) and was disqualified. But he perservered to improve his race walking technique and at the BC Masters championships, Mac won the 3000m Race Walk with a new BC Masters M75 record. Later in the season Mac competed in the 55+ BC Games and won the gold medal in the 5000 metre Powerwalk. But Mac did not compete in 2016 due to a setback from his cancer and another stroke. Battling his third stroke, Mac fought to overcome the loss of more muscular control. Mac traveled to Toronto in 2017 to compete in the Canadian Masters Indoor Championships and won gold again, this time in the M80 1500m Race Walk. Mac would compete in his last track and field meet at the 2017 55+ BC Games in Vernon. He entered three events and won two medals, including a bronze in the discus and a gold in the 1500m Race Walk, in a new 55+ BC Games record in the M80 age group.

Mac's dedication and courage to overcome adversity will remain as an inspiring example for us to follow.