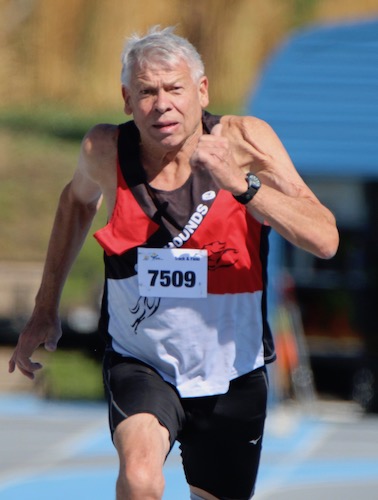 Bill competed in many meets during the last 20 years; including local meets, the BC Seniors Games (now called the 55+ BC Games), provincial, national and world masters athletics championships. But because Bill had devoted his life to serve as a firefighter, Bill's favourite track and field meet was at the World Police and Fire Games. Bill mentioned that he had competed in every Games to date and was considering travelling to Chengdu, China for this year's World Police and Fire Games.

Bill kept a busy schedule and was involved in many community projects. When Surrey won the bid to host the BC Seniors Games in 2001, Bill volunteered as co-director of the Games, and meet director of track and field. Recently Bill joined a committee that is trying to get Surrey to build a multi-event sports complex which would include an indoor track and field facility.

Bill had a great personality, always friendly, smiling and loved to talk. He was a dedicated athlete and despite knee problems for several years, he remained devoted to his training.