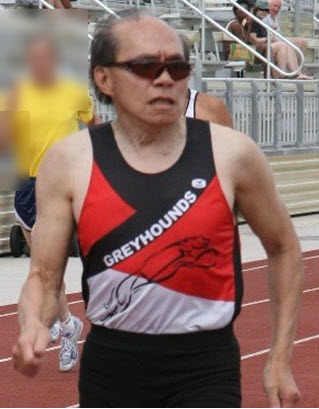 Born in Montreal, Herb Gee was an extremely energetic and active youngster growing up. At age 6 he joined a Bantam hockey team and loved to 'race' down the ice to score goals. He also played baseball and football, loved downhill and slalom skiing, dirt biking and karate.

In 1996, Herb moved to British Columbia where he met Les Robson who was the Fraser Valley track and field coordinator for the BC Seniors Games. In 1997, Herb participated in his first BC Seniors Games in New Westminster, winning 5 gold medals in the M55 100m, long jump, javelin, shot put and discus. Herb fell in love with track and field and for the next twelve years he would be extremely dedicated to the sport.

When the Greyhounds Masters Track and Field Club (known as the Tri-City Greyhounds at that time) was founded in 1998 (practices and competitions followed in 1999), Herb was one of the original members.

Herb competed in two Huntsman World Senior Games in St. George, Utah. In 2001, Herb won gold medals in the M60 50m, 100m, 200m and long jump. His time of 26.02 seconds in the 200 metres was less than a tenth of a second off the existing Canadian record. The next year in Seattle, Herb improved his M60 60m with a Canadian indoor record time of 8.18 seconds.

Herb said that his best memories in sports were from the years that he participated in Masters track and field and it was “the time with the Greyhounds that (he) cherished the most.” “I truly love you all, you are a great, great bunch of people” he said. He valued the camaraderie of his training partners as he ran those tough reps at practices, the fun-filled times he had on road trips with his roommates and the support of his teammates as he competed.

Herb coughed as he won six gold medals at the 2009 Richmond BC Seniors Games. Unfortunately this would be his last competition. After several tests in the fall, Herb was diagnosed with lung cancer. Herb crossed his final finish line on February 20, 2010.

Herb Gee was inducted into the BC Athletics Hall of Fame in 2015.