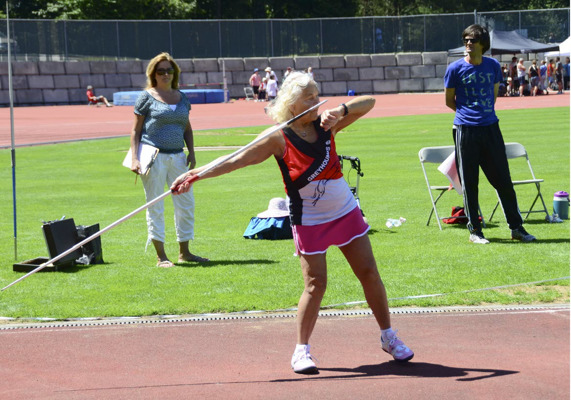 Mae Turek only joined the Greyhounds Masters Club in the last few years of her track and field career.  Exactly when she started to compete as a Masters athlete is uncertain, but it was probably at the BC Seniors Games, in the 1990's. Results for the Games in the early years are difficult to find but Mae did compete in the 1994 Games in Prince George and the 1997 Games in New Westminster. From 2004 to 2013, she competed in ten consecutive BC Seniors Games, winning 58 medals (29 gold, 21 silver and 8 bronze). Mae had an outstanding meet at the 2007 Nanaimo Games, winning gold in all five of the throwing events while breaking W75 Canadian records in the discus, hammer, and weight. She
added a silver in the 800m.

At age 79 and at the top of her age group in 2011, she won 7 medals (1 gold, 2 silver and 4 bronze) at the Games in Trail. The next year, at age 80, at the 2012 Burnaby Games, she won gold in the discus, shot put, javelin and weight throw, silver in the hammer throw and bronze in the throws pentathlon. In 2013, Mae competed in her final BC Seniors Games in Kamloops. Amazingly this would be her most prolific Games, winning 6 gold medals (100m, discus, shot put, javelin, hammer and throws pentathlon) and 8 medals overall.

Mae competed in at least four BC Masters Outdoor Championships, twice in each of the W75 and W80 age groups. In 2007, she competed in four events and won them all, breaking the Canadian W75 record in the hammer throw and the BC W75 record in the shot put. The following year Mae won silver in all five throwing events, finishing second to future Hall of Famer Myrtle Acton, who had just turned 75. Both Myrtle and Mae broke Canadian records in the W75 discus, hammer and weight throw, but as the gold medalist, Myrtle became the Canadian record holder for these events. Mae competed in her next BC Masters Outdoor Championships when she turned 80 in 2012. She had another great meet, winning gold medals in all five of her throwing events, including breaking the Canadian W80 record in the shot put. Mae competed in one International meet, the World Masters Games in Edmonton in 2005. It is uncertain what medals she won, but Mae set new W70 Canadian records in the hammer, weight throw and throws pentathlon.

Being determined and independent, she drove by herself to compete at Trail, Kamloops, Comox, Prince George and elsewhere. When she started to suffer from hip pain and walking became difficult, she put her four-wheel walker into the back of her camper to take to the meets. Mae would sit in her walker between throws, limp into the throwing area, and regardless if her throw was good or not, Mae would
always have a big smile on her face. Her family described Mae as a “kind, generous person who loved a celebration. She gave fantastic hugs, and her smile could light up the room. Her eyes twinkled when she was happy. She was gifted in math, art, English and sports...She was determined to live her own life as a true original. She was a faithful friend.”

Mae was born in Saskatoon, Saskatchewan, where she trained at the Teachers College to work with children. She moved to Surrey, where she raised her family. After retirement she moved to Vancouver, and when she could no longer live independently, Mae moved to the Little Mountain Place Care Home for the last few years of her life.