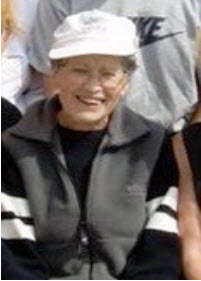 Anne Fleming was one of the three founding members of the Greyhounds Masters Track and Field Club (called Tri-City Greyhounds at that time). In October, 1998, a meeting was called for all track and field athletes who would be interested in joining a Seniors club. Next March, the club was formed and Anne volunteered to be the first secretary of the Greyhounds.

Anne was born in the district of Petrolia in Saskatchewan and lived in Saskatchewan until 1967, when she moved to Coquitlam. After her husband passed away she met Les Robson, who was on the BC Senior Games executive, and they became life-long friends. When the BC Seniors Games were hosted by Coquitlam in 1991, Anne and Les were honoured to carry the torch into the stadium for the Opening Ceremonies. This was the beginning of Anne's career in track and field.

For the next sixteen years, Anne competed in almost every BC Seniors Games until the 2007 Nanaimo Games, when she retired from competition at the age of 88. Anne was a sprint specialist and competed in the 100m, 200m and 400m, and won all three events at about six of the BC Seniors Games (probably more but results are not available). Only Olga Kotelko managed to edge Anne in the 100m on a few occasions and prevented Anne from sweeping gold in all three sprints more often. At the 2006 Games in Kamloops, Anne and her teammates broke the World Record in the 4x100m relay for women over the age of 80. Anne also competed in about five BC Masters Championships. At the combined Canadian and NCCWMA Championships in Kamloops, in 2000, Anne won the gold medal in the 400m and silver medals in the 100m and 200m.

In 1999, Anne travelled to Gateshead, England, to compete in her first and only World Masters Athletics Championships. Anne won the gold medal in the W80 200m (45.72), breaking the Canadian record. She also won two silver medals in the 400m, breaking the BC W80 record, and the 100m. Anne's only other international competition was in 2002, at the World Masters Games in Melbourne, Australia, where she won two gold medals in the 200m and 400m, and a silver medal in the 100m.

After the Greyhounds were formed, Anne seldom missed a practice. But she didn't like to run a lot of repetitions, instead preferring to run fewer reps at a faster pace. Once when the coach said to her that she was resting too long between reps, she answered, “I'm 80 and I want to see my 81st birthday.” (Okay Anne, take another minute). Anne was always smiling, completed her workouts quickly, and went home to bake.

Her children described their mother as, “... an amazing woman, independent, funny, stubborn, feisty, loving, and strong – an inspiration to us all.”