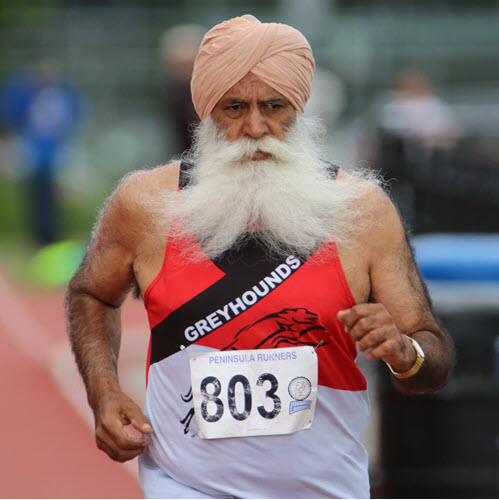 Harjinder joined the Greyhounds Masters Track and Field Club in 2013, and was an active member for seven years.
In his first year Harjinder competed in only two meets, the Trevor Craven Invitational and the BC Seniors Games,
winning a gold medal in the 3000m. Harjinder got off to a great start in the 2014 season, winning 4 gold medals
(400m, 800m, 1500m and 3000m) in the BC Masters Indoor Championships. But he got injured in the spring and
missed several meets, returning to win a bronze medal in the 5000m at the BC Seniors Game.

Perhaps the 2015 season was Harjinder's most successful year. Competing in the M60 age group he won 5 medals,
4 of them gold, in the BC Masters Indoor Championships. Harjinder also won a gold, a silver and 2 bronze medals
in the BC Masters Outdoor Championships. He won 2 more gold medals and a silver medal at the Trevor Craven
meet before completing the season by winning 2 silver medals and a bronze medal at the 55+ BC Games (name
changed from the BC Seniors Games).

Harjinder competed in two outdoor meets early in 2016, but unfortunately was injured in a car accident which ended
his season. In 2017 and 2018, Harjinder continued to compete in the long sprint and middle distance races, but he
added the throwing events, mainly the discus and weight throw to his list of competitive events. He continued to run
well and won about ten medals each year.

This year Harjinder entered the M65 age group and competed in the BC Masters Indoor Championships and five
outdoor meets. Perhaps the highlight of his 2019 season was competing with his Greyhounds teammates at the
Canadian Masters Outdoor Championships in Ste-Therese, Quebec. Harjinder won 2 silver medals and 3 bronze
medals, helping the Greyhounds win the Canadian Club Championships.

Harjinder was a dedicated athlete and took his training very seriously. Because he was still working, he often had to
complete his workouts alone. He was committed to the Greyhounds Club and when the club purchased a container,
Harjinder donated lumber and had his friend help make shelving so that the club could store our equipment in an
organized manner.

He left us far too early. We will miss our teammate who always had a friendly smile.