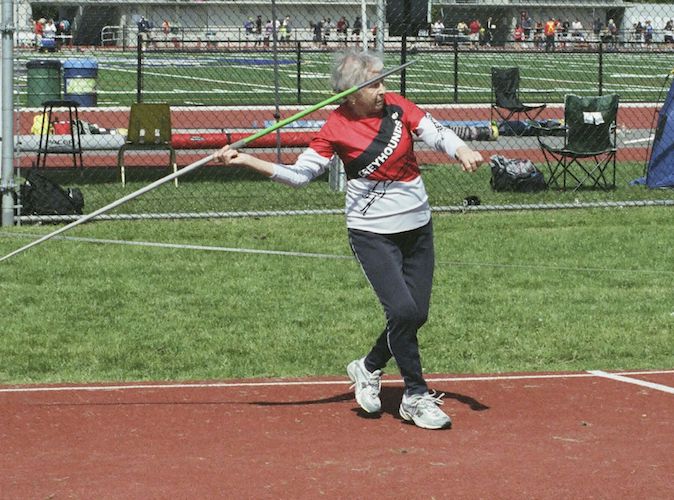 At one time the name 'Olga Kotelko' was the most recognized name in Masters track and field, not only in Canada, but around the world. She was interviewed by: Readers Digest, Chatelaine, Huffington Post, New York Times, Parade, Zoomer, CBC Radio, CBC TV, Global TV, CTV, Omni TV, Aljazeera TV, the BBC, Daily Telegram of London, and more. Two books were written about her, “What Makes Olga Run” and “Olga: The O.K. Way to a Healthy, Happy Life”.

Born in Smuts, Saskatchewan, she was raised on a farm during the Depression. This is where she learned her great work habits which she applied to everything she would do throughout her life, including being an elementary school teacher, playing softball and, of course, participating in track and field.

Olga competed in her first track and field meet at the age of 77. When she was 80 she competed in her first WAVA (now WMA) Championship in Gateshead, England, where she won her first of many world championships. With her passion and joy for competition, Olga travelled to many meets around the world, seldom missing a WAVA/WMA Championship. Olga would become World Champion in Australia, Italy, Puerto Rico, Germany, Spain, Canada, France, USA, Brazil and Hungary.

Olga set or broke 40 individual Masters world records in the W85, W90 and W95 age groups, and was a member of two W80 relay teams that also set new world records. At her last WMA Indoor Championships in Budapest, Hungary, Olga won 10 gold medals, and 9 of these were new W95 world records.

Olga set a wonderful example for everyone, young and old, of how to live a healthy and active lifestyle. She had a keen sense of humour, positive attitude, friendly personality, and respect for everyone. Olga was truly an ambassador for track and field and an inspiration to everyone who had the fortune to meet her.

Olga joined the Greyhounds in 2012 and although she was a member for only three years before the world lost an amazing woman, she left a huge impact. The Greyhounds was the only track and field club Olga ever joined, so we can proudly claim that Olga was a “Greyhound”.

Olga Kotelko was more than O.K. ... “she was a one-of-a-kind treasure and will be missed.”